Jack and Jill went up the hill
to lobby on behalf of big business and tobacco.
The Senate fell down and broke its crown.
And the House came tumbling after.

That poem is from my collection of political and nonsense poems, “Not-for-the-Nursery Rhymes.” I wrote and published them almost a decade ago, and now when I read it, it seems so quaint. Is the tobacco lobby still one of the top 5 most evil institutions? Not all political poetry ages well. Here’s an updated version. I readily concede, it is not my finest work, and that’s OK. Sometimes you just have to work things out. Besides, I (naively) hope that ten years from now readers won’t know what I’m talking about.

Jack and Jill went up the hill
to bust into the Capitol.
The unruly seditious radicals
put Democracy in condition critical.
They believed 45’s lies and people died.
Senators were forced to take sides.
Congress confirmed the election
to thwart their QANON erection.
But we’re not done. It’s not over yet.
We’re in a precarious political situation
just days before 46’s inauguration.
Pick your side and hold on tight.
We’re not done with this fight.

WordPress.com is excited to announce our newest offering: a course just for beginning bloggers where you’ll learn everything you need to know about blogging from the most trusted experts in the industry. We have helped millions of blogs get up and running, we know what works, and we want you to to know everything we know. This course provides all the fundamental skills and inspiration you need to get your blog started, an interactive community forum, and content updated annually. 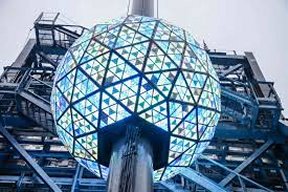 The wee hours are the best for contemplation, especially on this first day of a new year. The last 11 days have been exhausting: two days in the hospital (not covid), family in town to help me pack and move (they had to do the bulk of it), and a steady stream of minor and major setbacks. But we all survived, and we managed to have some Christmas cheer. So here I am, alone in a quiet new space, surrounded by boxes to unpack.

I rarely miss watching the annual ball drop from New York’s Time Square, but this year I left the tv off. Sure, if 2020 was a person I would spit in its eye as it slunk out the door; but it isn’t. Counting down seconds would not magically make everything better. There’s no fairy godmother to wave a wand and make corona virus disappear, turn my (brand new) bathrobe into a ballgown, or have an eligible bachelor bring me fancy footwear. The only thing left to do is keep the fire of hope alive, write poetry; and keep moving forward.

And now, a poem about the overnight watch. I wrote this in 2013. Happy New Year!

Midnight is where truth and lies become one.

The Zen and when of Midnight
is the razor’s edge between times,
a space outside of (right) now:
not today, not quite tomorrow.

The face and the place of Midnight
is a dark night and a thin veil
between the natural and other.

The little ones and old folk
are tucked up tight.
Midnight is occupied
by witches and lovers,
preachers and writers.
You know — all the cool kids.

If I could live my life
60 slim seconds at a time
let it be at Midnight.

Gift Giving
I don’t need anything but you.
A smile a laugh, let’s raise a glass.

Don’t give me something I have to dust.
How about a meal we don’t have to cook.

Don’t agonize over what to buy.
A warm hug is always the right size.

No delicate, awkward gift exchange
like a china plate atop a teeter-totter.

Just give me a kiss that I can return.
And I will carry your love everywhere.

This poem is my response to the Monday Poetry Prompt.

Is there a difference between a gift and a present? Yes, according to Merriam Webster.

Are you a writer, still looking for last-minute gifts? Check out The Season of Giving blog post by horror novelist Priscilla Bettis.

No matter what holiday you choose to celebrate this month, I hope it is joyful and brings you peace.

I did it again. I wrote the Monday Poetry Prompt. Here is my response.

Leftovers
Grandma believed one undone chore
would guarantee another day.
Not one to follow rules
I leave as many for tomorrow
as I did today, like writing
Monday’s poem on Thursday.
There aren’t enough hours in the day
when I only have four good ones
before and then after, a nap.

In other news, my friend and fellow blogger, Pat of e-Quips, added me to her list of Blogger Writer Quotes. It’s always fun to peek inside the curtain.

Speaking of writing, I hope you’ll click the link above and sign up for the Monday Poetry Prompt, delivered right to your inbox.

Since I provided the Monday Poetry Prompt this week, I figured I should probably write a poem to it.

Cooking with the Family

I was the salad maker when I was young —
the only one with enough patience
to chop everything to bite size pieces.

Holiday family gatherings as an adult
have seen single-me sidelined
as the married sibling
(the one with the womb)
and husband hold court in the kitchen.
I am usually on set up and KP.
I don’t care, that much.

But now I am caretaker
for mom. Separated by covid,
for Thanksgiving, I will be the chef
for our simple meal.
But I can cook.
I make quiche after all.

The moon has been on my mind this week. Blame it on my friend and Living Poetry co-organizer, Bartholomew Barker, who alerted me to this week’s celestial event with his lovely lunar November 18 Haiku. This is my response to last night’s sky.

I saw Selene tonight with her two suitors.
Sister Moon, what is your secret?
Must I orbit alone for eons
until love finds me?
She did not answer,
so I slipped inside
to my lonely dinner.

Then I read Lisa Joy Tomey’s blog response to this week’s Six Sentence Story prompt “wax.” Here is my lunar take on the prompt:

Leave it to the patriarchy to come up with the Man in the Moon. The moon is a woman, and for the ancient Greeks, a goddess. She waxes and wanes to display all her moods and faces, from slender virginal beauty to full-bodied womanhood. Of her many lovers, Endymion was her favorite and she blessed him with many children. Like the nocturnal predators that hunt at night, I also haunt the dark hours with Selene as my companion. She doesn’t speak but passes on her wisdom just the same.

Another excellent installment in Audrey Driscoll’s “20 Years a Writer” series.

And, I enthusiastically agree with Audrey’s premise: “We write for personal reasons. We publish to share our writings with the world.”

Now that so many writers are also publishers (of their own writings), publishing seems like a natural outcome of writing. First you write, and then (after a few other operations) you publish. A no-brainer, right?

No. Writing and publishing are two completely different actions. While many pieces of text are written in order to be published as soon as possible, many others are not.

We write for personal reasons. We publish to share our…

So this happened this weekend! Many thanks to Lisa Joy Tomey for hosting the monthly Poets Connection and inviting me to speak about submitting poetry for publication. I always love to “talk shop” with other poets.

I’ve been pondering this question today because of the LP Monday Poetry Prompt. Write a respect poem.

Twenty plus years ago, I was studying spiritual traditions and actively involved with mentoring young people. The topic of respect came up frequently. I believed then, as I do now, that every human being deserves the basic respect of personhood, which includes the dignity of autonomy over one’s body. Every human being on this planet is made of the same stuff as I am, which makes us spiritually, if not physically, brother and sister.

But that’s just the bare minimum!  It’s also true that to get respect you have to give respect, and respect is something that is earned by our actions. The one area of American life where those two tenants have left the proverbial building is politics. The last decade, the last four years in particular, has seen respect, civility and rational discourse about government and politics deteriorate to point where it has affected the entire population. These days I feel tainted having been dragged through slime that clings and corrupts.

No one is perfect of course. Like most people, I’ve received wounds and scars from people and given my fair share as well. But lately there have been wounds given and received as a direct result of the partisan divide between myself and people in my life. So here I am, pondering respect for others, the respect that I must have for myself and my beliefs and values, and loyalty based on a long personal history. I have no answers, yet.

You campaign in poetry.
You govern in prose.
~ Mario M Cuomo

It was simple back then, just a game
to teach children and make them tame.

If the leader is a dimber-damber*
find one who respects the Charters.

Don’t follow a leader who doesn’t respect
the populace he governs and neglects.

The US has chosen a new leader to follow
but with a divided country victory feels hollow.

I hope, pray and wish Biden luck.
With McConnell in the senate, we’re still fucked.

*A dimber-damber is slang for the leader of a gang of criminals.

Great Halloween poetry! Makes me want to grab a friend, some candy and/or a hot toddy, and watch scary movies!

I wrote a Halloween haiku every day for a week in anticipation of the haunty holiday.

fog smothers the ground
dropped leaves rot and mold, their stench
like an open grave

Have a happy Halloween!

Feature image is by Andreas Dress on Unsplash.